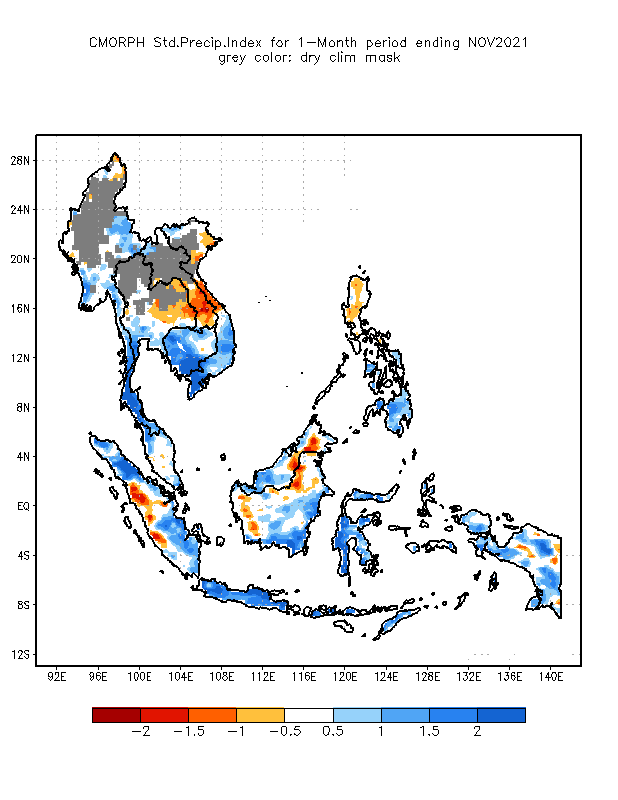 Areas of Concern: Vietnam and Cambodia

Areas of moderate to severe rainfall surplus have been observed in some parts of Southeast Asia region, in particular over Vietnam, Cambodia and Central Indonesia as shown by the 1-month Standard Precipitation Index (SPI) (Figure 1). This wetter than normal condition was consistent with the 3-month above-normal rainfall being experienced for the period August to October 2021 (see attached 3-month SPI). Other parts of Southeast Asia recorded rainfall surpluses, but these were not as extensive.

Negative sea surface temperature anomalies (SSTAs) across most of the central and eastern equatorial Pacific (CEEP) persisted and have strengthened (-0.5ºC to -1.5ºC), still at La Nina level during the month, while mostly over the western Pacific near the Maritime Continent were above average (0.5°C to 1.0°C) (Figure 2). Negative IOD value was still observed in October, as SSTs in the western equatorial Indian Ocean were slightly cooler than the eastern equatorial Indian Ocean. Active phase of the Madden–Julian Oscillation (MJO) has strengthened in the Phase 4 and Phase 5 (Maritime Continent) in the 1st half of October. These have contributed to the enhanced cloudiness and rainfall in most areas of the region.